If you’re an avid wristwatch wearer, then you know that buying a quality timepiece can be pretty costly. However, there is one watch that has been gaining popularity as the best automatic watch for $200 – the Orient Kamasu.

So, what’s all the hype about?

In this article, we’ll have a hands-on look at the features and feel of the Orient Kamasu Red model and see why it might just be the best choice for an affordable automatic watch.

So, stay tuned and find out what this Orient Kamasu review has to offer.

When looking at the specifications, it is clear the Orient Kamasu offers a whole lot more than many others for around $200.

For a long time, the Seiko 5 collection has been the value king and the entry point for those looking for their first automatic watch. However, Seiko is currently going through repositioning in the market with its new Seiko 5 Sports line. As a result, it’s no longer the most affordable option, nor are the specifications as desirable as many would’ve hoped.

Therefore, the Orient Kamasu seems to have everything to become the first-choice option for a durable and affordable automatic watch.

The Orient Kamasu watches are fairly new when the first models were introduced in 2019. They are significant upgrades to the two famous earlier models – Mako and Ray – primarily for featuring a highly-appreciated sapphire crystal and looking more elegant. 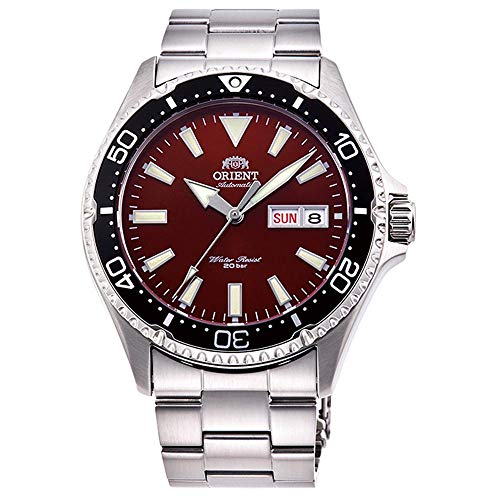 Prices pulled from the Amazon Product Advertising API on:

Product prices and availability are accurate as of the date/time indicated and are subject to change. Any price and availability information displayed on [relevant Amazon Site(s), as applicable] at the time of purchase will apply to the purchase of this product.

To be fair, I didn’t consider myself a fan of Orient watches before getting hold of the Orient Kamasu.

The Mako and Ray watches that were so widely popularized just didn’t ignite a spark in me. However, from the instant of receiving the Kamasu, something clicked in my head and changed my opinion of the brand, especially aesthetic-wise.

I bought the watch from Amazon for a little north of two hundred dollars. It arrived in a gorgeous box with a silver front (what a nice way to impress right from the start). Also, the box contained watch instructions and a warranty card.

The Orient Kamasu watch has a 41.8mm stainless steel case that fits my average-sized wrist (7.3in) just ideally. To my surprise, the watch is far from being bulky, considering it’s an automatic watch – it measures only 12.8mm in thickness, which is slimmer than several of my quartz chronographs.

The case comes with brushed lug tops and polished sides. The machining on the brushed parts isn’t too strong, leaving an excellent rustic-like appeal, whereas the polished surfaces are pleasantly shiny. Hence, the overall impression of the finishing is positive – nothing too much or too little.

The lug-to-lug distance of the Kamasu watch stretches to a modest 47mm, providing a somewhat smaller perceptible size than the 42mm case suggests. Therefore, anyone with slightly smaller wrists than my 7.3in circumference will also find the Kamasu appropriate in terms of dimensions.

On top of the case, there’s a one-way rotating coin-edge black bezel. It is super handy to rotate and aligns perfectly with the minute markers.

When it comes to the crown, it is a screw-down version, as you would expect from a dive watch. It also sports crown protectors that are always nice to see on a timepiece.

However, the handling of the crown is poor. The problem is that the crown is too small and hidden between the protectors, which makes the screwing process, especially the screw-in process, cumbersome.

I don’t have the slimmest fingers in the world, and if they’re slightly moist as well, then it’s almost impossible to screw in the crown. Also, if you evaluate the crown aesthetically, it looks out of place and awkward due to its size.

Though the crown’s size won’t become a problem if you wear the watch often – it eliminates the need to manually wind it and correct the time. So overall, it’s still a minor disadvantage compared to the overwhelming positives the case possesses.

The Orient Kamasu watch comes with a 3-link stainless steel bracelet with hollow end-links. The bracelet is entirely brushed and is similarly brushed as the lug tops. Like I already said about the case, the finishing is well-made, giving a pleasant appearance to the bracelet, too.

The bracelet comes with a push-button deployant clasp that ensures a secure fastening to the wrist. The clasp is also decorated with the Orient logo. It is easy to open and close, with nothing to complain about.

However, the bracelet isn’t flawless. The one thing that I noticed was that when not worn tightly around the wrist, the bracelet makes a squeaking noise. Not a loud squeaking, but still noticeable.

Although it’s something I don’t necessarily find to be a big flaw on watches, as long as it doesn’t have a thunderous rattling noise, it is still the case for improvement. What I do in this situation is that I wear metal band watches tightly around the wrist to eliminate the noise.

Now, when heading to the most striking part of this Kamasu, the dial, it makes me forget the slight letdowns of the crown and bracelet completely.

First off, the face of the watch is covered with sapphire crystal that is ultra-resistant to scratches and impact damages. Sapphire crystal is a substance that rarely finds its way to a $200 timepiece, which makes the Orient Kamasu a one-of-a-kind watch.

The Kamasu also strikes with a burgundy red sunburst dial that offers a magnificent hue when it catches the light. The tone is so unique that you’ll not find it from any other at the same price point. Maybe the Seiko Presage SRPE41 has something similar, but that’s about it.

In front of the red background, you’ll find a three-hand movement, which is another highlight of this Orient Kamasu. The minute and second hands are stretched and reach the minute markings with ease. They are also considerably thick, which makes the time capture flawless.

What I also like about the dial is the day-date feature. Instead of the same window for both the day and date, this watch has them visually separately. In my personal opinion, this solution looks way better.

Overall, the dial is just magnificent. And not only because of the color and features but also for the fact that the alignment of the markers is spot-on.

When it comes to luminosity, it doesn’t fall much short in comparison to the Seiko Prospex or Seiko 5 series dive watches. It has a greenish tone that glows brightly and lasts for several hours.

I placed the Orient Kamasu along with the Seiko 5 SRPD after a half an hour light exposure, and the results are visible in the image below. Both of them have a solid glow, with the only difference being that the Seiko SRPD has more of a bluish tint to the lume.

What’s also nice is that there’s not a significant mismatch between the strength of the glow in the hands and on the markers, which typically happens with affordable watches.

In addition, the luminous pip on the bezel is of a decent size and doesn’t get lost between the large hour markers and hands.

Probably the best selling point of any Orient automatic watch is the in-house caliber.

This Kamasu watch is equipped with a 22-jewel F6922 movement that enables one to halt the second hand and manually wind the watch. These are features that more and more watch enthusiasts look for in an automatic caliber.

Orient states the accuracy to be between -15 to +25 seconds per day. In reality, though, it rarely reaches these margins.

Mine gained 12 seconds in the first 24 hours, while with the next day, it added another 8. And after a week, the watch was off by +45 seconds. So, my Kamasu runs a bit ahead. Still, for an automatic caliber, it is a good result.

However, the most significant reason why the F6922 is so appreciated is that it rarely malfunctions. It is known for its workhorse reliability and its bulletproof construction.

Is Orient Kamasu the Best Watch for $200?

When going through the specifications the Orient Kamasu watch comes with and considering a week-long wearing experience on top of it, I must admit that the two hundred bucks have bought me a value king.

Sapphire crystal, bright luminosity, in-house hacking and hand-winding caliber, and stunning aesthetics – what more could you wish from an affordable diver?!

And although the watch has some minor letdowns in terms of the crown and bracelet, these are still tiny drops in the ocean that don’t affect the overall impression in large margins.

The only serious competitor it has at this price point, in my sincerest opinion, is the Seiko 5 SRPD line that also has a wonderful luminosity and hacking/hand-winding caliber. However, the SRPD costs a little more ($250) and features a Hardlex crystal instead of sapphire.

So overall, I would consider the Orient Kamasu to be the best watch you can get for $200.

The red Orient Kamasu is not the onliest option with the exact specifications and construction. In fact, there are five other variants you can choose from:

The prices of these Orient Kamasu models vary between $180 and $220 and are available on all the major e-commerce platforms, including Amazon and Orient’s own site.

The Orient Kamasu is an absolute steal for the money when considering its features and aesthetics. I’m pretty sure you’ll not find any other automatic diver with sapphire crystal, hacking and hand-winding caliber, killer luminosity, and 200m water resistance.

If you’ve never considered yourself an “Orient guy” before, maybe it’s time to change your stance. Like it happened to me.